My “repairing” experiences with a Rampart boat 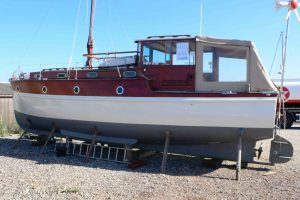 I bought the boat 2016 from Clive Ward. She was build by the Rampart Boat Building Company in 1935 and measured LOA 34´2”, Beam 9´3” Draft 2´10”. The boat was the subject of an extensive refit by Clive , that lasted four years from 1998 to 2002. He stripped the hull back to bare timbers and replaced several planks. The bottom was stripped of antifouling, recaulked , primed and re-antifouled. Decks were replaced with marine plywood epoxy fibreglass sheathed. A new mahogany wheelhouse was build. During the reconstruction four machine gun rounds were discovered in the carlings, discharged from a German MF 109 airplane.

I transferred the boat first from Pool to Yarmouth at the Isle of Wight, then over the Cannel to  Cherbourg. In the harbour – during my absence – she was assaulted by a storm and smashed against the dock. Three boats sank, fortunately my boat got only damage above the waterline (Fig.2) and survived. 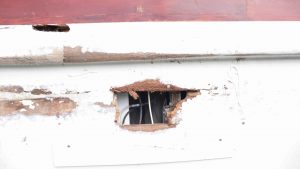 I nailed a plywood sheet on the hole (Fig.3) and sailed to Deauville.

From there – again with a lorry – we went to the Adria and finally entered the harbour Marina Fiorita near Venice. New  reparations had to be done. I opened the deck and found rotten  beams, which were repaired with marine mahogany plywood (Fig.  5, 6 and 7).

To secure the deck from the sun a cover was purchased (Fig. 8). Again problems arose at the starboard side above the waterline  with a lot of rotten planks and frames. This time a professional boatbuilder in Burano did the repair ( Fig. 9 and 10). The problems did not stop and I had to exchange the shear planks starboard and port (Fig.11 and 12). Due to age and illness I had to give up and sold the boat to a young Italian guy, who has the power and knowledge to repair the boat.

Summarizing I would give the following advice:

Do not cover the inside of the boat with insulating elements. This causes damp and you don’t see if water is penetrating the hull or the deck. Repair can be done only from the outside. Control the tightness of the deck as often as possible, the slightest inflow of water has catastrophic consequences. It is probably a good idea to take the boat out of the water in the winter and check for dryness of the wood. It is a basic problem if you buy a boat older than 50 years. Best to have boatbuilding experience.

In any way I had great fun with my Rampart, it was comfortable to live on board all the years  near Venice.