Abbey,  the TV star and energetic young boatbuilder, has begun work on replacing the transom of Snapdragon at Michael Dennett’s yard on the Thames. Hard work in the current heatwave, but at least there is shade in the slipway.

In a few weeks time the Iroko (and some Teak ) hull should be beautifully painted up and ready to launch.

David Morris the new owner of Snapdragon tells us he intends to change her name back to Kalbarri, and here are some more photo’s of her: firstly as Snapdragon in Romney lock near Windsor en route to Dennett’s yard; then a couple of work underway, but including a great shot of her bow planking. Boatbuilding nerds amongst us will notice the characteristic Rampart feature of planks near the sheerline sweeping up to hood ends at the deckline. Something which made Ramparts easier and quicker  to build but more vulnerable to rot spreading if the deck isn’t kept watertight – as the end grain of several planks are exposed at deck level. Luckily Kalbarri has lovely high quality Iroko and Teak planking, and clearly she is about to be redecked:

And indeed a few months later….. 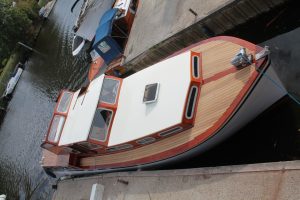